Reading English and American Literatures at University has left me little time to actually sit down and read novels that are more to my taste than some of the texts I’ve studied over the past few years. After handing in two dissertations and my final essays, I was unsure of what kind of reader I was, and what I was still interested in. 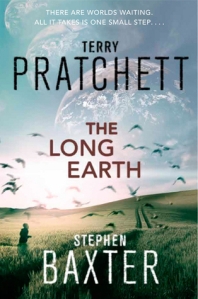 d anything by Terry Pratchett since secondary school, but The Long Earth intrigued me. Stephen Baxter is a pretty well known sci-fi author, and though I’ve never ventured far enough into the genre to have read any of his novels, the idea of a collaboration between Baxter and Pratchett couldn’t have sounded more interesting. I picked The Long Earth up at Pritchard’s, an independent book shop in Crosby I’ve felt at home in for pretty much my whole life.

This novel is, in my eyes, the perfect introduction to sci-fi if, like me, you’re not quite sold on the literary genre. Sci-fi is a lot easier to feel comfortable in when it’s a film or television show usually, but I fell into this novel and wanted to never get out of it.

Joshua Valienté can step naturally between a seemingly infinite number of parallel Earths, a fact he learns on Step Day, when the existence of these worlds is made public by and he finds himself having to save groups of children who have stepped into another version of Earth and not been able to step back. The majority of the book follows Joshua on a journey with a Tibetan Engineer-turned-Artificial Intelligence, Lobsang, out as far as they can go, to the furthest Earths they can possibly find, in the “High Meggers”. What was initially a search for any interesting information, turns into a mission to find out what is causing distress to some of the inhabitants of the Higher Earths. I will admit that, when they find out what it is, I was quite surprised.

The Long Earth has more than successfully taken on the cliche topic of parallel universes, with characters that have enough personality to keep you engaged and invested in what happens to them.

Once you’ve finished this novel, you won’t be able to help picking up the next in the Long Earth series, The Long War, which takes place a decade later. I’d suggest buying it before you’ve finished the first, otherwise you might find yourself suffering some withdrawal symptoms. The third of five in the series, The Long Mars, is due to be released on the 19th of June.