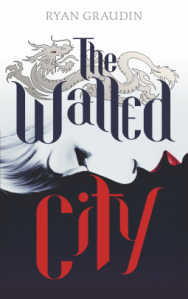 I received an advanced review copy of this novel from Orion, via NetGalley, in exchange for an honest review.

The Walled City by Ryan Graudin

Disguised as a boy, Jin Ling searches for her missing sister, Mei Yee, who was sold into the brothels of the Walled City. It’s a cut-throat world of gangs, drug-dealers and warlords and every day is a struggle to survive. Jin Ling relies on her speed and cunning but how long will her luck hold? When a mysterious boy, Dai, requests her help with a dangerous mission Jin Ling’s inclined to say no – this is a world where no one can be trusted – but the mission offers her a vital chance to see inside the brothel where her sister may be being held.

Jin Ling and Dai join forces, but will either of them survive the mission? Is Mei Yee still alive? And how will any of them ever escape the stifling city walls?

With a fantasy setting inspired by Kowloon Walled City, Hong Kong, Ryan’s novel has a rich authenticity and an intense atmosphere, and its pace will enthral the reader from the very first page.

THE WALLED CITY manages to uniquely slot a dystopian crisis into a modern-day landscape. The Walled City, Hak Nam, is set right in the middle of a functioning civilisation, and serves as the local melting pot for criminal activity, drugs, prostitution, poverty. What makes the The Walled City a little more striking is that it is a fictional story based on a real place, Kowloon Walled City, which was demolished from 1993 to 1994.

The Walled City revolves around three main characters: Jin Lee, a young vagrant girl running around the city looking for her sister: Mei Yee, trapped in a brothel having been sold by her father, and Dai, a young boy with a tendency to save people, and a pretty big secret, who is dying to get out of the Walled City.

I really enjoyed this novel, the characters were a joy to read, there were some surprising twists and turns in the plot, and the links with a genuine historical place made it feel compellingly significant.

I can’t deny that I noticed far too many similes, and clichés, in the narrative for my usual taste. It felt a little like they marred what was otherwise a well-written, beautifully sculpted novel. Definitely would recommend to any fan of fast-paced YA books.