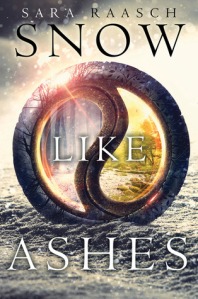 A while back, I wrote a Waiting on Wednesday post about this book. I’d been counting down the days until I could read it, so excited. And then, for some reason, I got a little distracted. Working (more than) full time, yet still unable to afford to justify any new book purchases, I didn’t get my wish. That was until a few weeks ago when I was paid and decided I deserved a treat. And a treat I got. Read on for my review of this wonderful book.

Sixteen years ago the Kingdom of Winter was conquered and its citizens enslaved, leaving them without magic or a monarch. Now, the Winterians’ only hope for freedom is the eight survivors who managed to escape, and who have been waiting for the opportunity to steal back Winter’s magic and rebuild the kingdom ever since.

Orphaned as an infant during Winter’s defeat, Meira has lived her whole life as a refugee, raised by the Winterians’ general, Sir. Training to be a warrior—and desperately in love with her best friend, and future king, Mather — she would do anything to help her kingdom rise to power again.

So when scouts discover the location of the ancient locket that can restore Winter’s magic, Meira decides to go after it herself. Finally, she’s scaling towers, fighting enemy soldiers, and serving her kingdom just as she’s always dreamed she would. But the mission doesn’t go as planned, and Meira soon finds herself thrust into a world of evil magic and dangerous politics – and ultimately comes to realize that her destiny is not, never has been, her own.

Snow Like Ashes dives right in, introducing its main characters half-way through a scene. Meira, the narrator, an orphaned Winterian refugee, and Mather, the future King of Winter, are combat training together. I felt this opening sequence set up the rest of the novel perfectly – introducing a strong young woman as its heroine, flawed but determined, and ready to fight. I was pleasantly surprised by Meira. She isn’t fearless, but she doesn’t let her fear control her – a differentiation that is rarely shown. As a reader, I really got the sense that Meira just wanted to do more, she felt helpless, and useless, and that’s something a lot of us can resonate. When she gets the chance to prove herself, we’re already rooting for her.

There are so many YA fantasy novels trying to forge a place for themselves in the YA canon with characters who can wield magic – Raasch actually manages this in the most imaginative and interesting of ways. The use of conduits make the magic something a little more rare, and giving the power to use it to those who are in the seat of responsibility is also a nice trick. It makes the rest of the non-magical narrative a lot easier for us non-magical folk to relate to, does anyone else feel that? It also results in the characters and their qualities, their actions, and their words becoming more important – not everything rides on who is the most powerful, but the better person. I love fantasy, and I love magic, but it can often just leave novels to boil down to one thing: who has more of it. That’s a lot less important in Snow Like Ashes. Of course, they’re searching for the conduit, but the way they do it shows off who they are as characters. That’s appreciated.

Like Leigh Bardugo’s use of dark and light in Shadow and Bone, Raasch utilises something that is natural and embedded in the reader’s consciousness – the seasons – to create shared identities for her characters without having to explicitly explain them. The patriotism of the Winterians was crafted to feel like nostalgia, rather than xenophobia and aversion to change and integration (or multiple cultures and people living side by side), an issue we all see (or refuse to see) in every day life. Relevant! I often find in many fantasy novels that characters display a love for their country with no reason for it, perhaps this is realistic, but it shouldn’t be. Bardugo’s Grisha trilogy also combats this well, eventually having its characters realise that the country they’re fighting for needs to be worth fighting for, instead of fighting for it simply because they’re Ravkans, conscripted, and are forced to. (Can you tell I’ve also read the Grisha series lately? It’s on my mind. Also the blog, there’s a review or two. Here and here. )

Meira and Mather’s connection to their country without ever really knowing it is touching, if not a little idealistic. Honestly, this may sound a silly, but I did like the way Raasch turned the perceptions of the seasons on their head a little through the experiences of her characters. I hate Winter, for the most part. Other than Christmas comforts, I hate the cold – to me, Winter is evil. Spring feels like relief and a bit of hope on the way to Summer. Yet for a few hours, I felt a little connected to Winter and abhorred the idea of the seasons changing. I felt connected to a country that the characters I was reading had never even known, because they were connected to it, and Raasch did that so well. So well done.

Honestly? It has been a couple of weeks since I read this book. My bad for putting off reviewing it until right now, because other than the obvious – I can’t remember much about the characters, just Meira, Mather, and Theron. Theron’s dad was an ass. I did love Sir, though. So there’s that. I’ll be sure to read this one again in a few months. It didn’t take long to read.

In true YA style, there is an awkward love triangle that demands more of a word count than it probably should – but Raasch has written two loving and deserving men who vie for Meira’s affections. I slightly resent her for making me love both Mather and Theron, as I would usually want to wring one of their necks by now. And I would usually enjoy imagining that, while sailing my ship with a captain’s hat on made out of a napkin, all the while shamelessly reblogging fanart on Tumblr. I love them both, but most of all I love Meira, so whichever (or neither) makes her happier is the one I’ll eventually be down with. Am I right, ladies? (and gentlemen?)

Book #2 in the series, Ice Like Fire, is due out in October 2015. I may as well write another Waiting on Wednesday now, because it’s going to be going in my Google Calendar. And my diary. And on a wall planner.

3 thoughts on “Snow Like Ashes by Sara Raasch – Book Review”